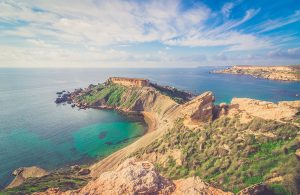 Malta offers numerous gorgeous places that should definitely be on your bucket list. There are so many awe-inspiring locations in this tiny country, that it’s impossible to mention them all. But here’s the good news: Due to Malta’s small size, you can visit them all in no time at all!

We’ve carefully selected the creme de la creme of Malta’s sights and listed them here. Are you ready to be inspired?

Located bang in the middle of the channel that separates mainland Malta from its sister island of Gozo, the blue lagoon is one of Malta’s most photographed scenic spots. You can spend the entire day swimming in its crystal clear waters, as the mass of clear blue (amplified by the lagoon’s sandy bottom) is quite vast. You even have a few caves to explore, and should you need a longer break from the sun, you can swim through a cave tunnel that takes you from the lagoon, which is cocooned between masses of rock, towards the open sea.

You can reach the Blue Lagoon via boat transfers from Sliema or Cirkewwa in Malta. Tip: Being such a hot spot, the Blue Lagoon is best avoided in the peak summer months of July and August. We also advise you to arrive early enough in the day (ideally before 10am) to grab a spot on the little bit of sand.

Not as blue as the blue lagoon, but equally fascinating, the Grand Harbour can be best viewed from the Upper Barrakka Gardens in Valletta. If you stand on the gadens’ large balcony facing the sea, your eyes will most likely settle on Fort St Angelo, which juts out into the centre of the barbour from Birgu (Vittoriosa). The Grand Harbour is one of the world’s largest natural ports. You can while away the time by simply admiring the surrounding fortifications, and watching the ships and cruise liners entering and leaving the majestic port. The harbour is also host to the yearly Malta International Fireworks Festival.

One of the greatest cathedrals in the world, and one of the richest examples of Baroque architecture, this 16th-century masterpiece built by the Order of St John will fascinate anyone, even those who aren’t in the least interested in building styles. What makes this place of worship so special is its stark contrast between its exterior, which is rather plain and dull, to its interior, which is gleaming with the ubiquitous gold. It’s also brimming with rich decorative details and paintings by world-famous painters such as Caravaggio and Mattia Preti.

Enjoying the highest point in Malta at some 250 metres above sea level, the Dingli Cliffs are a popular destination for hikers who want to enjoy Maltese countryside at its best as well as eagle-eye sea views. Since they’re situated southwest of Malta, these cliffs also serve as a perfect romantic spot at evening time when the sun is heading for the sea’s horizon. You just have to be there to take in all their splendour.

Further south from Dingli Cliffs, lies the Blue Grotto: a spectacular sight just off the little harbour or sea inlet of Zurrieq. You can admire its immense, natural archway from a dedicated viewpoint above, but you must take a boat from the Zurrieq harbour to be able to witness the series of caves and their iridescent waters. The stunning colours of the water within the grotto are the result of a combination of sunlight and the cave’s position, which produces hues ranging from dark blues to phosphorescent aquamarine. 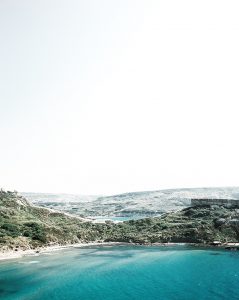 The first of these is the most crowded because it’s the most easily accessible and is flanked by a large hotel. However, you can enjoy more peace and quiet in the other two. Ghajn Tuffieha, which is tucked between the three beaches, can be reached via a number of steps, but it’s certainly worth the descent and ascent. Before heading down, you can admire the unforgettable view of the bay with is bluish-green water and clay slopes. This is one of Malta’s most amazing panoramas.

Gnejna Bay is a clay slope away from Ghajn Tuffieha, and can be reached on foot if you’re an adventurous hiker or climber. If you prefer taking the easier way out, you can reach Gnejna Bay by car or public transport as it’s just beyond the rural village of Mgarr

This is the third largest dome in the world, having taken a good 27 years to build. Situated in the central town of Mosta, this impressive structure is visible from numerous viewpoints in Malta (the Mdina bastions are probably your best best). The inside of the dome is decorated in visually pleasing blue, gold, and white. But it’s not just the beauty and immensity of this dome that makes it famous. A 200kg bomb fell through it during an air raid in World War II. Luckily, it didn’t explode, so the 300 people attending mass that morning were spared. You can now see a replica of the bomb inside the church. 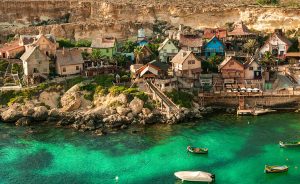 Popeye! Are you still around? Unfortunately, no. But the film set for the 1980 film starring Robbin Williams is. You can admire full views of the colourful seaside village from above at its entrance, and even take a tour around to immerse yourself in the captivating world of Popeye. The overall view of the village and its contrasting colours that stand out against the blue sea and cliffsides that nestle it is a wonder in itself.

San Anton Gardens in the village of Attard in central Malta is a shady oasis that combines history, architecture, and a picturesque scenery. The gardens feature an immense variety of pretty flowers and evergreen trees, some of which are over 300 years old! Several walkways will take you past fountains and ornamental ponds… you might even begin to feel you’re in the film ‘Return to Oz’.

The Palace served as the summer home of Antoine de Paule, a knight of the Order of St John, back in the 17th century, and currently stands as the official residence of Malta’s President. It’s only open to the public on certain occasions, but you can walk among the gardens and its courtyard at no charge. 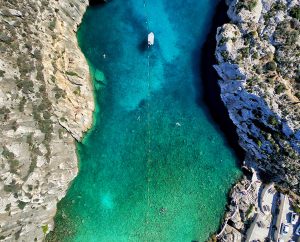 Meet Malta’s sister island: Gozo! She’s probably the most idyllic of destinations around the Maltese Islands due to her relatively unspoilt nature, quaint towns, and quiet beaches. You can get to Gozo via the main ferry boat that frequently traverses the channel between the two islands. Even though Gozo is smaller than Malta, there are enough sites to keep you occupied for a week.

You must visit the fortified medieval city called Citadella, situated in Gozo’s capital Victoria (aka Rabat); the seaside resorts of Xlendi and Marsalforn; the Ggantija Temples; and Ramla Bay. At Dwejra, you’ll find the still popular, former site of the Azure Window; the Blue Hole (famous among snorkelers and divers from around the world); and the equally well-known Inland Sea and Tunnel. Since the Azure Window is no longer around, Wied il-Mielaħ Window has become just as popular.