From urban resorts where you can revel, to quiet villages that permit you to relax

Malta is island life par excellence with a cosmopolitan lifestyle to boot. You can live it up in its busy towns and resorts, or enjoy the simplicity of its idyllic villages. Malta may be small, but you surely know: The best things come in small packages!

Here are 10 Malta towns and villages that will certainly get you hooked.

This bustling town is the throbbing heart of Malta. It’s got everything you need: sandy beaches like Balluta Bay and St George’s Bay, Spinola Bay dotted with colourful fishing boats, rocky stretches from which you can jump into crystal-clear waters, seaside promenades for strolling, outdoor cafes for people-watching, and restaurants for indulging in Maltese and international food. There’s also the district of Paceville for all the nightlife, a marina for yachting, luxury boutiques for some serious shopping… You name it! 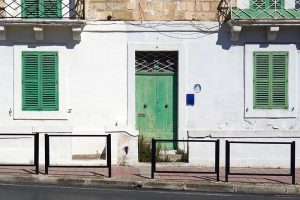 Meet St Julians’ next door neighbour. This equally popular resort town features a long seaside promenade that leads all the way from St Julian’s to Gzira and Manoel Island. You have numerous bars, eateries and shops all along, with points of interest including a 17th-century watchtower, and Tigné’s historical fort with its business and shopping centre. On the south side promenade known as ‘The Strand’ or ‘The Ferries’, you can enjoy views overlooking the capital city of Valletta. This part of town is also equipped with great ferry connections to Valletta, as well as boats that are ready to take you on a harbour cruise or all the way to Comino and the Blue Lagoon. Together with St Julian’s and Gzira, this is one of Malta’s most popular areas for renting an apartment. 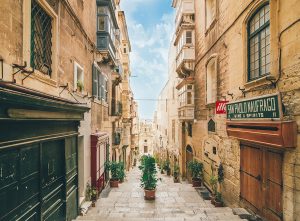 This is not a town, neither a village. But we can’t not mention Valletta. Fun fact: This walled city is not as old as you might think! What gives this away? The Knights of St John, in the 1500s, skillfully crafted a plan of streets forming a regular grid to cater for water and sanitation, as well as free circulation of air. The streets incline and descend in a similar fashion to San Francisco’s—a great visual addition to Valletta’s picturesque streetscape of Baroque churches, palaces, houses with different coloured balconies (typically red, green, and blue), and old, wooden shop facades. Valletta is a must-see UNESCO World Heritage Site.

Facing Valletta, on the opposite side of the Grand Harbour, lie Malta’s older trio of cities—Vittoriosa (or Birgu in Maltese), Senglea (Isla), and Cospicua (Bormla). Known collectively as the Three Cities, they offer a captivating insight into Malta’s maritime fortunes. Each was critical to the defence of the island, which explains their strategic position right across from Valletta, with Vittoriosa and Senglea being the most prominent as they jut out into the Grand Harbour. All three are enclosed by a huge line of fortifications known as the Cottonera Lines, which were also built by the Knights. The narrow streets and wine bars of Birgu, and the waterfront promenade of Birgu and Isla are unmissable.

Yes! Malta has a ‘Rabat’ too, it’s not just Morocco! Malta’s Rabat is a traditional and relatively peaceful inland village where you can enjoy a stroll in its pretty streets, a glass of wine in one of its cosy wine bars, or a thrilling adventure down in St Paul’s Catacombs. If you keep driving west from Rabat towards the sea, you’ll soon end up at the majestic Dingli Cliffs that proffer amazing sunset views. Don’t miss the Verdala Palace and Buskett Gardens that are on the way. 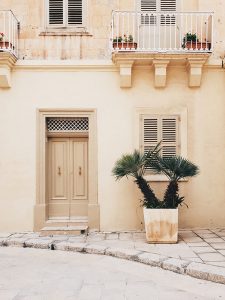 Rabat’s neighbouring Mdina (aka Città Vecchia or Città Notabile) is Malta’s former capital. Sitting majestically on a promontory that overlooks the surrounding countryside, and dominating with its picturesque skyline, it offers impeccable opportunities for a photo shoot. Just picture golden, old citadel walls and a red church dome standing composed against the sunset sky, medieval palaces, grand Baroque buildings, and quaint narrow streets. As the sun sets, Mdina’s curious passageways don a mysterious aura, the soft glow emanating from the wrought-iron street lamps infusing the shadows with a calmness that brings serenity to anyone roaming the ‘Silent City’. 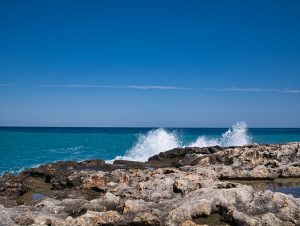 If you’re after a typical Maltese village away from the crowds, surrounded by unspoilt nature, then this is it. The village core is host to an imposing parish church dedicated to St Nicholas that overlooks the main square. Siggiewi is also known for its not-so-quiet grand feast and fireworks held in June in honour of its patron saint, and also for hosting the traditional Easter walk starting at the village square and ending at the famous Laferla Cross perched on a hill outside the village. It’s an amazing sight at night to see the ‘fjakkoli’ or fire lanterns guiding the way.

Not far off from Siggiewi are the megalithic temples of Hagar Qim and Mnajdra, and the rocky, out-of-the-way Ghar Lapsi beach from where you can see the islet of Filfla. If you’re up for walking, Siggiewi boasts lovely hiking trails flanked by rubble walls. You might discover some interesting places along the way, such as Girgenti Palace (aka Inquisitor Palace) that serves as the summer residence of the Maltese Prime Minister, and the curious outdoor Girgenti Chapel. 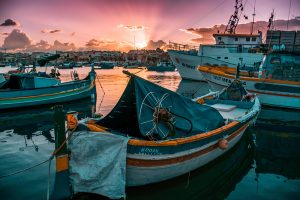 This is your typical fishing village that offers a flea and fish market on Sunday mornings, seaside restaurants specialising in fish, bright-coloured fishing boats… you get the picture? While in Marsaxlokk, you should also explore Ghar Dalam cave, and take a swim in the nearby and natural St Peter’s Pool that’s great for snorkelling and jumping off low cliffsides.

Bugibba is a popular summer resort that falls within the St Paul’s Bay zone in the north of Malta. From mini fun rides for the young ones to karaoke bars and nightclubs, Bugibba is sure to please any age group. It comprises loads of hotels, restaurants, pubs, ice-cream parlours, a casino, and a cinema. At Dawret Il-Gzejjer, the point that separates Bugibba from St Paul’s Bay, you’ll also find good sea connections to Comino and other day cruise options. 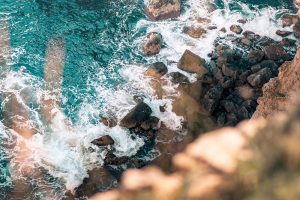 Situated adjacent to Bugibba, Qawra is also popular among kids and adults alike, with its many hotels, bars, restaurants and other tourist facilities, but with the added bonus of serving as home to the modern Malta National Aquarium. It’s also equipped with a more sophisticated children’s play area with an underwater theme and unusual climbing structures. It will certainly be a hit with your kids. Both Qawra and Bugibba have made it to the list of top places for renting an apartment.